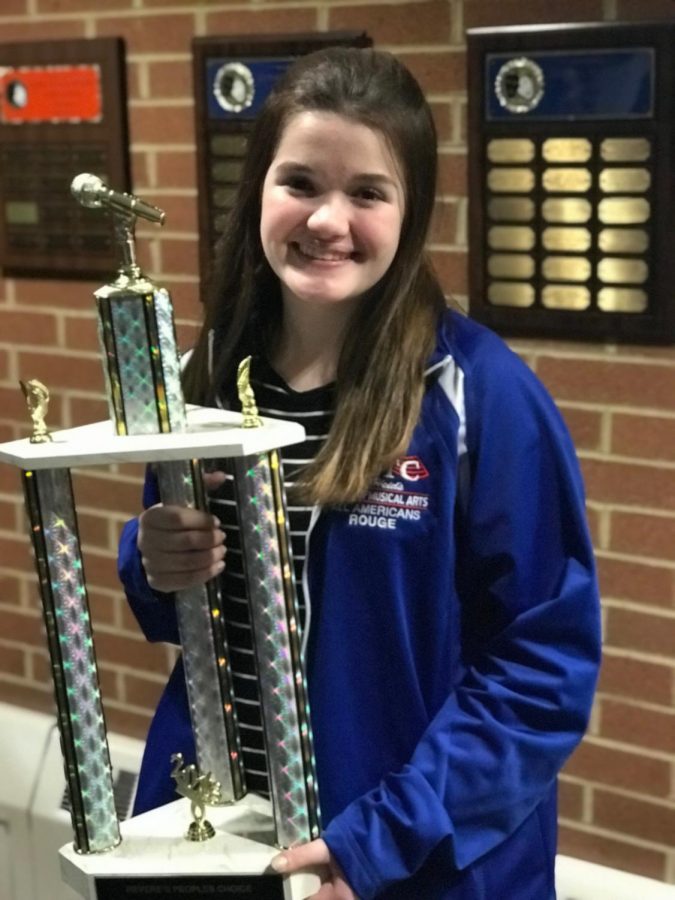 Listening to music is a common pass time for many, and music exists almost anywhere. With music on the radio, in jingles and commercials and playing at department stores, it is not uncommon to hear a tune or have it stuck in one’s head. Many sing, hum, or whistle, but for freshman Ellie Lewis, singing is an everyday activity and takes up a majority of her time.

Lewis has been interested in singing since she was two years old. She has participated in choir since first grade, and she also plays many insturments. She recently received recording equipent for Christmas and began to record her own songs.

“She was always singing. The first song was her ABC’s at about two years old, to the tunes of Sesame Street, Big Bird, Elmo and the rest of the gang. She took her first dance (ballet and tap) clases around age four or five. She sang practically all the time. On the swings, while walking in the park, in the car, pretty much every where. She sang for two years at the Akron Children’s Choir and did competitive dance for two years with Creative Motions Studios (CMS) before finding and joining ETC last year,” Lewis said.

Lewis also mentioned some of her daughter’s achievements in singing and dancing.

Ellie Lewis discussed what instruments she knows how to play and how she started recording her own music.

“I got some recording stuff for Christmas and I fell in love. I know how to play guitar, ukulele and piano, so I sometimes will make a track,” Lewis said.

Lewis was not aware of ETC, a show choir group, which stands for energy, talent and comittment, until a year ago. Lewis explained how she became involved in ETC.

“When I joined ETC I did not know what show choir was, but now it is my life. I became involved after my mother posted a video of me singing and someone said I should check out ETC,” Lewis said.

Lewis won the school talent show this year and several other awards.. Lewis mentioned the first award she won and touched on the other rewards she has received.

“My first major singing award was winning solo competition in eigth grade, last year. Then this past weekend I won solo competition. I was against 46 other people and that [winning] felt amazing, considering many were seniors,” Lewis said.

Lewis receives help from vocal coach Tim Carson and she credits her success to him. Lewis talked about her biggest accomplishments this year and how she won a competition with a song she wrote.

“My biggest accomplishment would either be winning solo competition this year or getting to record in a studio for the first time. My singing teacher, Tim, has many connections and hooked me up with a recording artist. He helped me record “Bound to You”, which I won with,” Lewis said.

Vocal coach Tim Carson has coached pop and rock singers for 26 years and has clients all over North America.

Carson, who met Lewis at a boot camp in Stow during the summer discussed what he worked with her on and how he helped develop her voice with training.

“I could tell that Ellie [Lewis] had a lot of potential, but she’d only been trained classically. I have been helping her develop a more modern sound, and extend her range without hurting her voice. The results of how her hard work has elevated her voice speaks for itself,” Carson said.

Since the boot camp in August, Lewis has had online lessons with Carson, meeting about three times per month for the last five months.

Carson touched on how singing is a skill that can be strengthened and the common misconception that a person can either sing or cannot.

“So many people think that singing is something where you’ve either got it or you don’t. It is just not true. Singing is a skill just like any other that can be developed, and Ellie is a great testimony to that. I have spent my career helping singers of all levels reach their full potential, and have enjoyed a front row seat to many amazing success stories over the years,” Carson said.

From singing the ABC’s at two years old to singing on a stage in front of hundreds of people Ellie Lewis has come a long way and hopes to continue singing and participating in ETC.