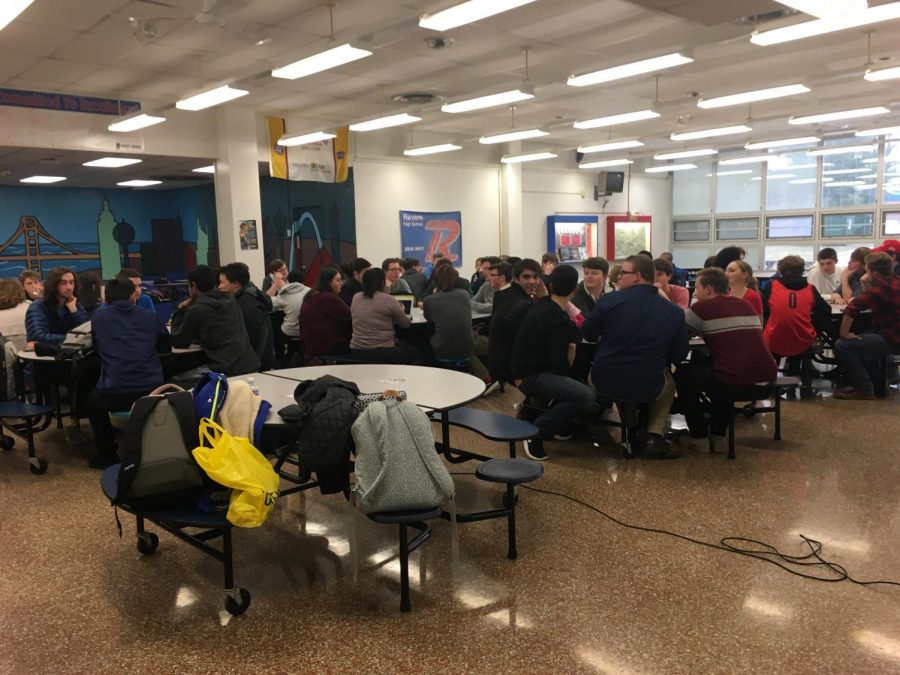 Students converse at different tables in the middle ground event, which was held in the cafeteria on February 14.

The advocate group Students Demand Action (SDA) held a middle ground event to discuss various topics on gun control with representatives from the Junior Statesmen of America and the Young Republicans.

The middle ground event was held on February 14 after school in the RHS cafeteria. The event was open to all students, including members of the student-led organizations. The event was advertised through different flyers placed around the school, an offer of free food and social studies extra credit for those who attended. Around sixty students attended the event, and history teacher Jeff Fry facilitated the activities. Fry commented he was happy to see a student-run event and commented on how students organized the event.

“I really don’t think we’ve had too many [events] like this, especially where [students are] organizing multiple groups, and then making a concerted effort to recruit kids,” Fry said.

The SDA group, a newly formed organization established this school year by juniors Julia Scott and Keri Tomechko, decided to hold the event as a way to bring together student groups of differing opinions on gun control and have them come to a compromise on various topics; these topics ranged from gun ownership to the student walkout that occured last year in March at Revere (for more information and coverage on the Revere student walkout on March 14, 2018, please visit reverelantern.com). Throughout the event, students were instructed to partner up with someone and go to different tables with people of opposing viewpoints on the topics. For around six to seven minutes, students at each table would respond to a series of questions on a specific topic and attempt to reach a compromise with everyone at the table. Once the tables compromised, the entire group of participants would congregate and listen to a representative from each table and explain their compromises to the rest of the groups. At times during some of the topic discussions, some tables would begin to argue different political ideologies and spark debate. Scott explained how the SDA representatives mediated the clashing.

“The way we dealt with [the arguments] was we wanted to clash, we wanted people to have disagreements, but we wanted them to remain civil. . . . If they were getting too heated or they were kind of losing their cool, then we had to mix the tables up or we gave them a new topic, or we asked them to calm down,” Scott said.

The event was coincidentally held on the anniversary of the Parkland shooting that occured last year, which had gained significant traction the following month with hundreds of protests occuring nationwide for increased gun control measures in governments across the country. During the school walkouts last March at Revere High School, each participating group captured the moment of their respective demonstrations by sending personalized notecards to state legislators, and taking a group photo of the students who attended to honor those who lost their lives during the shooting. In regards to furthering their goals during the middle ground event, the three student organizations did not publicly attempt to impose any of the discussions made during the event towards any governing body or school administration. Senior and JSA president Emily Fischer explained why the students took a more simplistic approach to spreading the event’s activities.

“I think with stuff like this that can be a little bit uncomfortable for people, it’s good to ease everybody into it. . . . I’m sure in the future, as this gets more developed, it would be awesome to incorporate some sort of statement to send to an actual representative. For the initial thing, I think it was just more about the conversation and capturing the conversation taking place,” Fischer said.

The student organizations will most likely attempt to replicate this event in a related fashion for next school year.