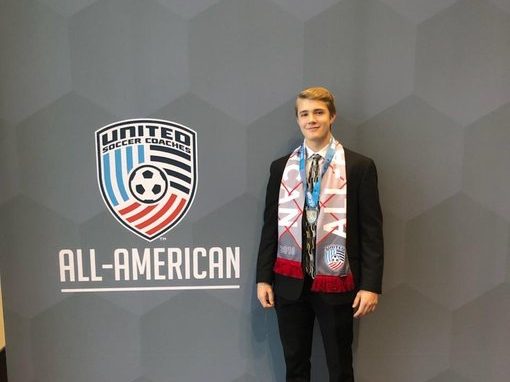 Sandor Jakab was named a division II All-American player, and only 68 other male soccer players in the country achieved this accomplishment.

History teacher and father Sandor Jakab explained how individuals are selected for the award. He discussed how players are able to move forward, as well.

“The players are nominated by other coaches and voted for. If you are voted enough you move on to the state level and are presented, and once again there is a vote that takes place, and so on,” Jakab said.

Senior Sandor Jakab explained the award has been a goal for him since he was younger and mentioned what achieving his goal felt like.

“It is the highest award a player can get. The feeling was incredible. Growing up I watched other Revere players win it and ever since then it had been a major goal of mine. So, finally accomplishing that goal meant a lot to me,” Jakab said.

Jakab talked about what it felt like to be a leader on the soccer team and to finish his last season 2nd in the state and as an all American award recipient.

“Although, we didn’t accomplish the team’s ultimate goal of winning the state championship, leading the team there was an amazing and memorable experience. I’m fortunate to have been able to lead such a good group of players and be a part of the Revere soccer brotherhood.

“He is a very intelligent soccer player that reads the game and sees the game better than most. As a captain, he was a leader for us and, as a four-year Varsity player (two years to the State Final), his experience was key to this team,” DePompei said.

Jakab discussed what it was like as a parent to see his son finish his high school career as an All-American and one of the top players in the country. Jakab also mentioned what it felt like to attend the banquet in Chicago where the players were honored and see his son receive the award.

“As a parent it was surreal and incredible. I am proud of him. To cap it off with something like that [All-American award] and to be able to go as a parent and watch my son receive an award like that, along with a lot of other top players in the country who were recognized in Chicago, was incredible,” Jakab said.

Jakab plans to play soccer in college, but as of yet is undecided on a school.