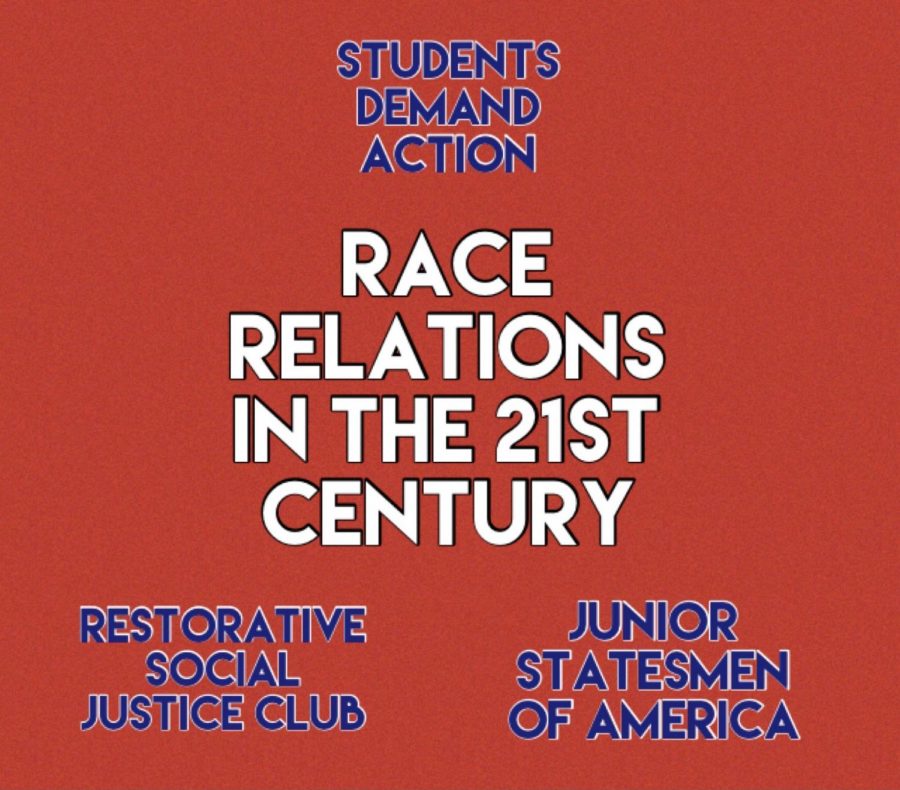 Students Demand Action, Restorative Social Justice and Junior Statesmen of America worked together to hold a “Middle Ground” event, giving students the opportunity to speak about issues going on in the world today.

Sitting in small groups in the cafeteria on May 7th, students began to discuss topics such as Asian hate crimes and racial discrimination. They discussed their thoughts and answers to questions asked about these topics. Everyone was encouraged to talk about their views and opinions in their groups, giving students the chance to listen to other people’s thoughts on these topics, and take away new viewpoints that they would not have otherwise considered without going to the Middle Ground event. Attendees got to hear what everyone else had to say, as well as being encouraged to give their own input in their small groups. Hearing other people’s input on issues can help people get a better understanding from a different perspective. Students that attended this event got the chance to branch out of their comfort zones and talk about these important issues.

The Middle Ground Event is held annually, and this year’s theme was Race Relations in the 21st Century. Previous year’s themes included gun violence and environmental issues. Roughly 70 people attended and were invited to speak out and share their opinions on tough topics such as violence and the rise of hate crimes and discuss racism against Asian Americans.

“Students Demand Action is an organization that strives to promote conservation and discussion about important topics facing society today. They wanted Revere students to have a meaningful investigation and conversation about prejudice,” Fry said.

Fry explained the process of the Middle Ground event this year and what the students had to do during the event.

“They asked questions for each group. The kids met in groups in the cafeteria, and they discussed issues and topics and shared them out to the entire group with a microphone,” Fry said.

“We wanted to provide a forum for students at Revere to be able to discuss their thoughts about race relations, not just in the context of [recent anti-Asian hate crimes], but how it has affected their lives . . . We wanted to have people step outside of their comfort zones to share their experiences regarding [racism],” Du said.

Anthea Phan, leader of the Restorative Social Justice club, explained why the theme for the Middle Ground event this year was Race Relations in the 21st Century.

“We decided to attack [racism] and give it recognition as an issue and a problem we have to face,” Phan said.

There has been a rise in anti-Asian hate crimes over the past year, and in response to this, there have been protests advocating to “Stop Asian Hate.” The number of hate crimes against Asian-Americans surged after the coronavirus pandemic started, but racism, violence and hate are not going to make a global health pandemic go away. Taking anti-racist actions such as holding events like these helps to get the conversation about racism and discrimination started.

Du explained the way that the topic of racism was approached during the Middle Ground event this year.

“We talked about race relations, not just at Revere or our community, but also within our own families and our entire nation as a whole,” Du said.

Du explained what his favorite part of this year’s Middle Ground event was.

“I liked that after each of these questions, we had people come and share what they talked about in their small groups, and I thought that was very important because by doing so, they were able to share their voices beyond their small group . . . Everyone attending could really learn something from the event,” Du said.