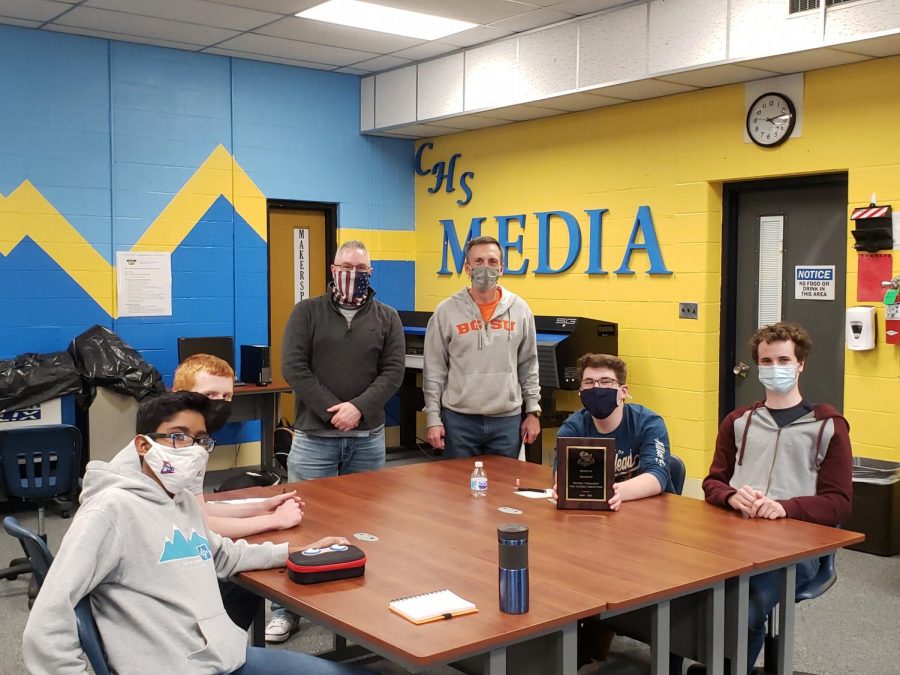 Hosted in Columbus, the State Tournament was a double elimination-style competition. To qualify for the State competition, a team needed to participate in various tournaments throughout the year, winning at least one, have a high placing at Regionals and/or have the best record in its division.

Academic Challenge Co-Adviser and head of the Varsity team Jeff Fry explained more about the State Tournament itself.

“The State Tournament was in Columbus at Saint Charles Preparatory School, and they had the top twelve teams based on regions. They had six regions with two teams each, and then they had four wildcard schools,” Fry said.

Composed of a variety of questions, each section covers many topics, so students must be knowledgeable about all subjects.

Co-Adviser Nicholas Kos described some examples of what the questions may cover.

“There are all types of questions; They can vary from World Literature, American Literature, math, science, all kinds of different topics. You really look for students that are well-rounded in terms of their knowledge to compete,” Kos said.

The style of the tournament itself can vary between competition to competition, based on where it is taking place, but there are two main styles of competition: Ohio Academic Challenge (OAC), and National Academic Quiz Tournament (NAQT). Since Revere competes in two different Leagues, the format changes frequently.

Alex Summerville and Sarishja Mahajan have competed in Academic Challenge since seventh grade and were both part of the qualifying team. Summerville explained the changes in the style of competition due to COVID.

“We compete in Summit and Medina County Leagues. During the regular season, we participate in about seven or eight rounds over several weeks, completing two or three each Monday we compete. Normally we take a bus to some other high school and compete in classrooms, but because of COVID our season was shifted to a Google Meet format, using a website called Buzz In Live instead of physical buzzers,” Summerville said.

“The first one is called NAQT. It’s a nationally used format, and there is a tossup question which you have to buzz in first [to] answer, and then whichever team gets it right also gets three bonus questions,” Mahajan said.

The second format is OAC. Although the scoring is more complicated, this style is Mahajan’s favorite.

“There’s another format called OAC, which is used for Ohio, and that’s what we used for the State tournament. In that there [are] three rounds, one is called categories; the next is the alphabet round, where all the answers start with the same letter; and then finally, there’s a tossup round. Basically, we play the other team, and whoever has the most points wins. If there’s a tie, we have a set of tiebreaker questions, and whoever gets one right first wins,” Mahajan said.

Summerville explained the process of getting to states.

“Getting to states was rather exciting, because it hasn’t happened for the team in a good while and because to do so, we had to beat Hoban twice at the Copley regional tournament. This was really gratifying because they’ve had this whiz kid on their team for the past three or four years who answers almost every question and who we thought was basically unbeatable,” Summerville said.

Although the varsity team was mostly composed of juniors and seniors, freshman Neal Pandela and sophomore Tate Johnson also participated.

“Leading the charge for us, though, and the one who really took us up a few levels was Tate Johnson. I’m sure the entire team would agree that without Tate, we would never have made it to states,” Summerville said.

In addition to Academic Challenge, many of the students competing for Revere also participated in other activities.

“Within that group, we had kids who played varsity sports, we had kids who were in the pit for the musical, [and for] Math COM. They are a well-rounded group of kids who participated in a lot of activities, which made it fun,” Fry said.

“Last year, we qualified for regionals by winning a league, but then they canceled the whole tournament. We have qualified for states around 4 times in the last 25 years, so it is not a regular everyday thing that we do. We have good expectations for the future, we have a strong junior group going into next year. I would thank the seniors for a great four years; they were fun to work with and be around,” Fry said.