Science, Media wing to close down over winter break 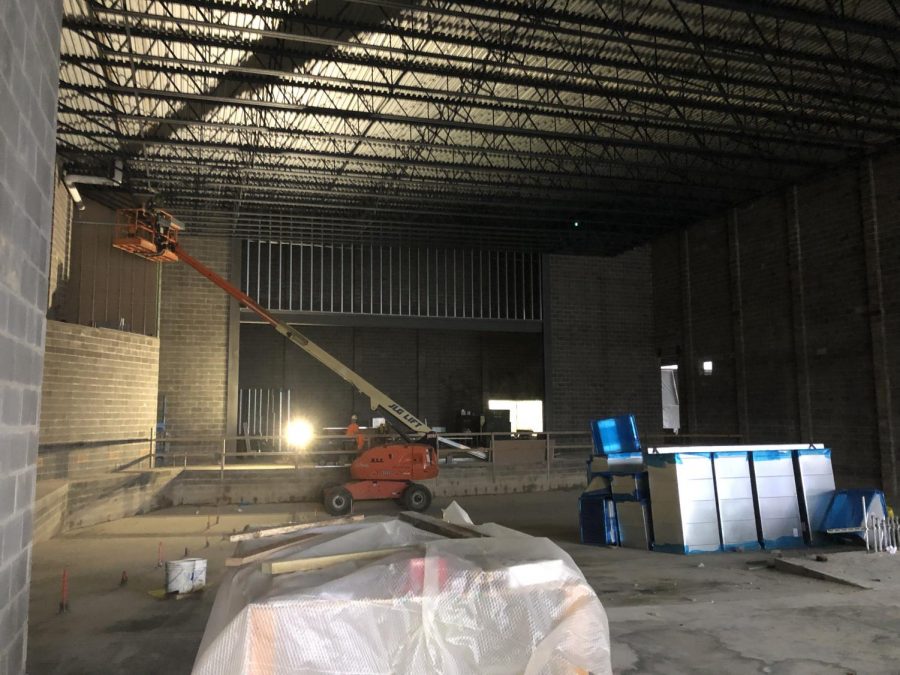 The auditorium under construction in the new high school.

The science/media center wing of the high school will be shut down beginning January 1 due to construction and remodeling in that area.

Students and staff will no longer have access to the science/media center wing when school resumes again after winter break. The new high school is currently under construction and as part of the project, the science/media wing will be integrated into the new building. Construction on this part of the school will begin over winter break. Several science classrooms will be shut down due to construction, including rooms: 133, 131, 129, 127, 130, 128, 126, 224, 225 and 223. The teachers in these rooms will be relocated or become traveling teachers in the building. RHS Principal Phil King commented on how the process of room assignments will work.

“For the most part everyone will be in the same classroom every day, however, there may be an occasion where one of the teachers that travels needs to have a space for a lab so they will switch with another teacher for a day. What will happen is the teacher will come up with a communication tool to make sure students know which room they need to report to,” King said.

Several rooms will be repurposed for science rooms throughout the school to accommodate the majority of the science department. Five of the nine science teachers will normally have a permanent room while teachers Jeff Shane and Eugene Sawan will become traveling teachers. With the majority of lab rooms being shut down, it will be harder for some labs to do their work. Jeff Shane, science department head, spoke about some of his concerns with the lab rooms being closed.

“There are no classes being limited or cut due to the move, but the only thing that is going to really change is there are going to be some labs that just can’t happen . . . because you need refrigerators to hold specimens,” Shane said.

Along with the science rooms, the media center, video productions and photography rooms will all be closed as well. Photography will be limited to the art rooms come January due to the closing of the wing. Video productions will also be moved to a different location. The wing staircase will also be off-limits and will create more traffic in the halls. King described how the staff is going to combat the issue.

Aside from the science/media center wing, construction continues across the district. According to Superintendent Matt Montgomery, Bath Elementary school is nearly complete as the architects and engineers are going through a punch list to make sure the building is up to their standards. Some items that could appear on the list are paint jobs or drywalling mistakes. Richfield Elementary is in the process of getting new LED lights and an HVAC system for the school, which is expected to be completed by December 31. The middle school is expected to go through the same renovations as Richfield Elementary with a project start time this spring and a project end when school starts in September. The stadium’s artificial turf is nearly ten years old and will be replaced over the summer. Montgomery explained why a replacement is necessary.

“The turf is on its tenth year and the life span is ten years, so . . . when we got the safety testing for the turf for this season, everything passed and is safe but the seams of the turf could go in a moment’s notice and when that happens it is very expensive to do a temporary repair prior to replacement,” Montgomery said.

Montgomery and other administrators traveled to different stadiums including those of the University of Akron, Massillon High School, Barberton High School and Copley High School. Schools use different brands and at different stages of age. The project will also include a resurfacing of the track, which is expected to be completed by August 1. The new high school is currently on track to open in September 2020, with some portions of the new building being drywalled and painted. The main gym in the new school will be 24,000 sq. ft, and house multiple courts separated by court dividers. Another project under construction is the new bus garage located on Everett Road. The project is on track to be completed by December 31.