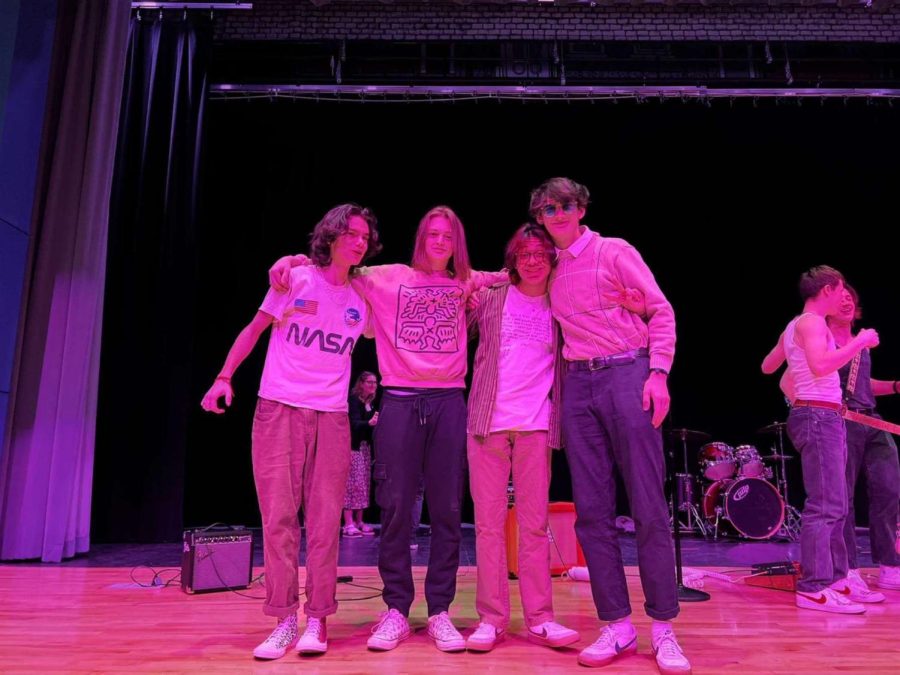 The band Jor stands on the stage after their performance at the Variety Show.

The lights dim, and students begin to shuffle onto the dark stage. The lights come back up to reveal different instruments and five students who begin to tune their instruments for the final act of the Variety Show before intermission starts. Once everything is set, The Saturday Evening Post strums out a cover of “Looking Out For You,” by Joy Again. The crowd begins to cheer louder and louder until the song is over.

One band member, Sophia Salmons, leaves the stage and the four boys that remain form their second band, Jor. Another band member, Aiden Passalaqua, thanked Junior Joe Earl in the crowd before beginning their original song, “Joe Earl’s Premiere Feature Film.” The band members play the song and interact with each other on stage. Lead guitarist, Cameron Weir, shows off his guitar skills and plays part of the song on his back without looking at his fingers on the strings. After the band finishes, the crowd gives a standing ovation.

The group started early in the summer last year and has evolved into a full band named Jor. As seen in the variety show, the musicians are part of two separate bands, The Saturday Evening Post being the other band, which includes fellow junior Sophia Salmons. Passalaqua explained how the band came together.

“Sometime last summer, Luca and Cameron would get together, and they would just play some music, and Sophia would be there too. Sophia is in choir, so she likes to sing. She always said she wants to sing and we should do a band,” Passalaqua said.

The band played later in the summer as the opener for Salmon’s mother’s band and decided to try out for the variety show. The band was missing a key component, so Passalaqua used Instagram to call attention to the need for a drummer, which is how Catlett joined.

Weir explained that the band began to take off and gain interest in the variety show.

“We got together at Sophia’s [house] and started learning covers of songs and started to practice and from there, we got a few songs down and then once the variety show was announced, we were like ‘oh, might as well play in it.’  So we got down one song, and then Aiden wanted to write an original song,” Weir said.

During the variety show The Saturday Evening Post sang “Looking Out for You,” first and then Jor played an original song, “Joe Earl’s Premiere Feature Film.” The band referenced junior Joe Earl for pure comedic effect since Earl is not at all a part of the band. Jor stems from this joke, and Passalaqua explained the name further.

“A lot of times on my phone it would autocorrect Joe to Jor and I don’t know I just thought it would be funny,” Passalaqua said.

The band Jor decided to give a shout out to Earl to get a laugh out of the audience during the Variety Show before playing their original song. The band is now attempting to move to the next step with their song and release it on big streaming platforms including Spotify and Apple Music. The uploading process is not easy, but the band hopes to have “Joe Earl’s Premiere Feature Film” online by the end of the summer. Weir is a part of the program School of Rock where he competes in different competitions and has met other guitarists. With this, he has been through the uploading process and explained how it is a pain.

“I’ve had experience with recording music and stuff, it’s a very difficult process. We thought we got close with other stuff, but there are just a lot of obstacles along the way that draw it out,” Weir explained.

Weir has been playing guitar for six years and tries to practice every day along with his involvement in School of Rock. Passalaqua took a different approach to guitar and learned the instrument all by himself whenever he had free time; now he’s been playing for around two years and has also been through the rigorous process to try to upload music.

“I’ve gone down the rabbit hole a few times trying to upload music, and it’s so hard. . . you have to upload it through an actual uploading service. . . Recording is also such a hassle and that was just me recording with just one guitar and my voice,” Passalaqua said.

An array of things go into uploading music including recording the different instruments. Senior Lawrence Saltis is part of a different band at Revere and during practice for the variety show offered a studio space after seeing Jor’s performance. Passalaqua explained the band’s options now for recording their music.

“Lawrence Saltis came up to us after some rehearsal and [said] ‘I think you guys should really put that [song] out. I know how to use that [recording software]. If you want you can text me, and we can set something up,’ so we might, or, because we have a lot of music, we might just go to an actual studio with an engineer and just pay for actual studio time; it’s more costly, but it might be worth it,” Passalaqua said.

The uploading process is one battle, but there’s nothing the band can upload unless they create the music in the first place. Passalaqua, Weir and Deliberto play guitar in the band, Catlett plays the drums and Salmons sings in The Saturday Evening Post while Passalaqua sings for Jor (Salmons is not a part of Jor). Passalaqua creates the original songs for Jor along with help from Weir. He explained his process to get the song to its finished state.

“Usually I write a progression that I like, and then I’ll play it through and I’ll hum out some vocal melody until I find one I like, and then I’ll try and figure out some lyrics. I used to be really really bad at writing lyrics; I’ve gotten better, but as long as it rhymes and it’s a metaphor of some kind, I think it’s good enough,” Passalaqua said.

After the guitarist has a base down, he will take it to Weir to get an opinion and later take it to the whole band to create a final product. Although Deliberato and Catlett are not directly involved in the making of the lyrics, their talents are useful to quickly form a song.

“Pace and Luca can just throw down something like that. It’s really impressive. We just play it, and they just got it, so it’s basically done by the time we get to the big band setting,” Passalaqua said.

Once the entire band learns the song, the members will practice a few times until they have it down. The members of the band enjoy being in the environment because they are all friends that share a hobby.

“Cameron with School of Rock, it’s not like he knows [the other musicians] organically, he knows them because they’re musicians and that’s his only relation to them. Me and Cameron have been friends as long as I’ve been in Ohio and Luca was really my first friend ever in Ohio,” Passalaqua said.

All members of Jor agree that the reason the band exists is not just to play music but to have fun. Catlett explained the reason he stays with the band.

“I gain the ability to be a part of the creative process that I love about music. I get to be part of a group of like minded individuals that have the common passion for music that I do,” Catlett said.

Jor hopes to release a single of “Joe Earl’s Premiere Feature Film” in the summer with a normal version and an acoustic version. The band plans to stay together for next year’s Variety Show and beyond.