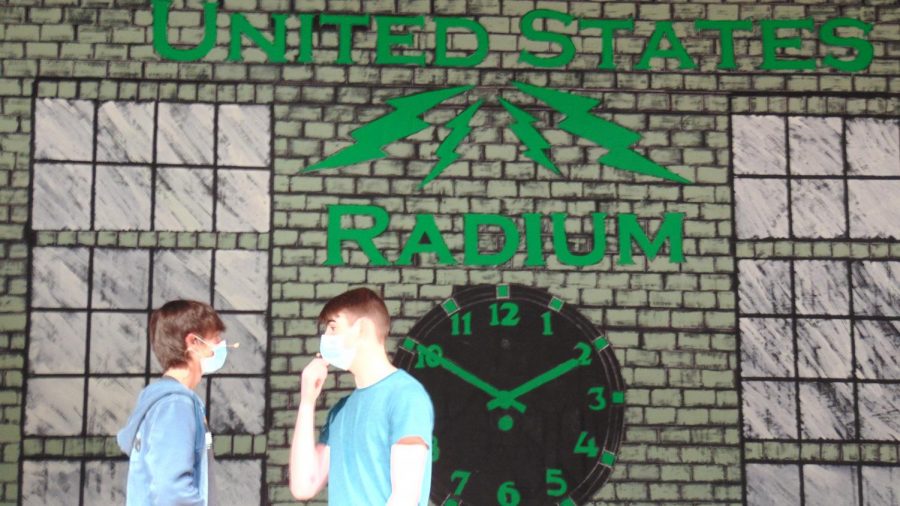 Aaron Stalnaker and Noah Restivo rehearse for the performance.

After World War I, the United States looked for technological advantage they could. Of course, darkness fell every night, giving a temporary pause to the fight, but what if the troops’ equipment could glow?

Just twenty years earlier, French physicists Marie and Pierre Curie discovered the element radium. Known for its illuminating glow and considered a “miracle element,” radium was immediately successful in the treatment of cancer and was happily used in cosmetics and toothpaste. The classic radium glow was gorgeous and effective. Attempting to use the luminance practically, the United States established several factories, hiring hundreds of young women to use radium to hand-paint equipment such as watches for soldiers. The girls also took advantage of the contagious glow as it rubbed off on their clothes, hair and skin. Some even began wearing their best dresses on the job and rubbing the paint on their teeth, giving their outfits and smiles a brilliant shine for parties after work.

Although their managers assured the ladies that the glow was healthy, even going as far as asking the girls to use their lips to bring their paint brushes to a fine point, they soon noticed the strange pattern of illnesses following exposure.

Putting this exciting story to action, the Revere Players will perform Radium Girls with the help of a new director, Sarah Pine.

Although this will be her first show as the director at Revere, Pine has plenty of experience in theater.

“My undergraduate degree and my first Master’s degree were both in theater, and I have worked in the theater community in a variety of roles since I was in high school. I still work for the Ohio Shakespeare Festival when I’m not here, so that is really where my background was before I came to teaching,” Pine said.

Pine hopes to share her experience with her students and sees this as an opportunity to give the kids a taste of professional theater.

“It’s really just an opportunity for me to take some of that experience and share it with the students. Obviously academic theater is very different from a professional environment. You’re way more interested in process over product, but I think it has been a great experience,” Pine said.

In addition to directing the play, Pine also divides her time teaching between the high school and the middle school.

“At the high school, I teach a couple sections of comprehensive English 9 as well as a section of English 9, so I teach freshman when I’m [at the high school]. Then in the afternoon, I go back to the middle school and teach seventh grade honors ELA,” Pine said.

“I’m splitting my time teaching English in the two buildings. It can be [difficult]. . .  It is a pain to be at the high school in the morning, go down to the middle school in the afternoon, and then come back to the high school [for Players’ practice], but thankfully they are so close that it doesn’t prohibit it,” Pine said.

Senior Aaron Stalnaker has been a member of Players for four years and is both the Players board president and a member of this year’s cast, playing Arthur Roeder, a factory owner.

Although sad to see former director Rena Baker retire, Stalnaker is optimistic that Pine will succeed.

“It’s been really cool getting to see how she teaches as opposed to how Mrs. Baker [taught], and she has been great so far. Mrs. Pine has done a great job making us feel comfortable and helping us understand what we need to do in order to make the show the best it can be,” Stalnaker said.

Junior Grace Deliberato has been in Players since she was a freshman and has been involved in theater since she was nine. This season, she will be playing the lead role—Grace Friar, one of the girls who is sickened by the paint.

Deliberato agreed with Stalnaker, saying that although Baker will be missed, Pine has seamlessly joined the group.

“It was different because you’re losing a director you’ve worked with for a while, but she really knows what she is doing. She works really hard, and she is really efficient. It’s been really cool to have her as a director,” Deliberato said.

Aside from her extensive theater experience, Pine brings another unique asset to the stage: her husband, a professional actor.

“One opportunity that was really great was [that] my husband is also a professional actor and theater performer, and he got to come in and do a workshop with the kids on some specific acting techniques. I think that was a really great experience for them,” Pine said.

In addition to a new director, the genre of the work is new. Pine explained what stands out about the show itself.

“It’s a slightly more serious work than we’ve always done. It’s not like we’ve never done dramas, but this is a pretty intense kind of show. It’s dealing with a serious issue, and I think that’s a fun opportunity for the students to stretch those other muscles and be a little more dramatic,” Pine said.

Stalnaker explained the historical context of the show.

“It’s based on a true story. . . Basically, when the radium started poisoning the girls, they were trying to sue the company, and it is the story about the struggle of the girls, essentially trying to do one of the first employee movements to get the company to pay for its consequences,” Stalnaker said.

Even though the show has a more serious nature, Deliberato explained that all ages can benefit from hearing the stories of the girls.

Given the high stakes of accurately portraying the true story, Stalnaker is confident that the audience will feel the emotion the original factory workers felt.

“It’s a really incredible story, and the people in it are really dedicated to making sure they portray the story of these girls. It’s pretty heart wrenching, and I think we do a good job linking the audience to the stage,” Stalnaker said.

This performance is also different from other productions in its portrayal and focus on historical events.

“It’s exciting, and it’s also an interesting piece in that it has a massive cast of characters covering a bunch of different time periods and locations. It’s really a kind of big group story,” Pine said.

Although COVID has challenged the ability to produce live, in-person shows, these productions are beginning to come back.

“Live theater in the area is finally just starting to come back after the pandemic, so I think people should come and support it on the local level,” Pine said.

The performances will take place December second through fifth. Tickets can be purchased at the door or online at www.revereschools.org/domain/943.