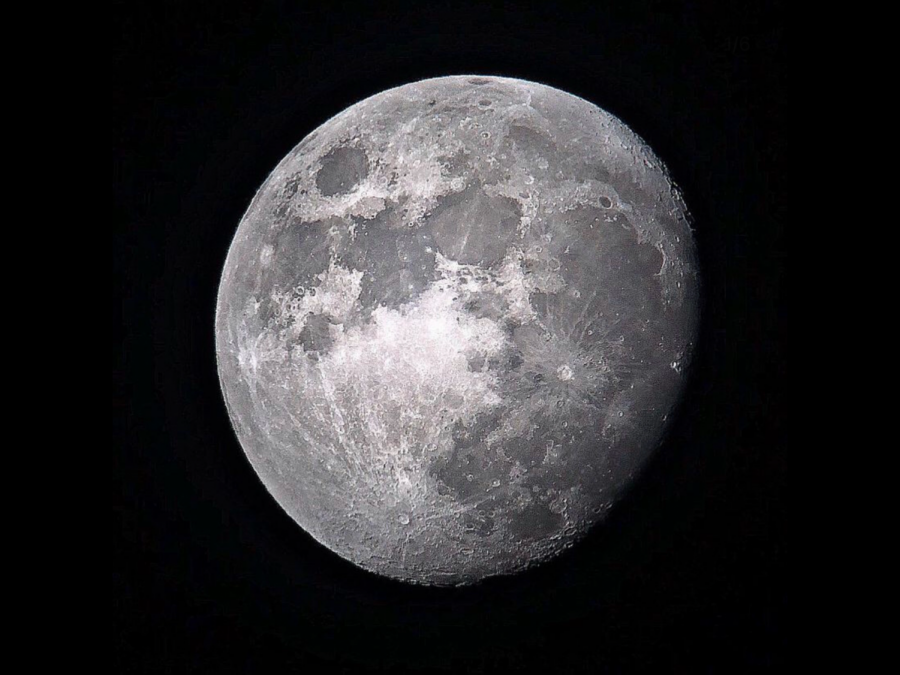 Photo of the moon from Shamp’s telescope

Tyler Shamp had hit a wall. He had just reached the epitome of his 3D modeling career, however, this was no comfort to him, so, never one to sit indolent, he began to search for his next venture. To Shamp, the obvious starting point was the garage. Entering his ever so familiar garage, Shamp noticed nothing but the standard garage items. Desperately searching for something to inspire his next endeavor, he began to sort through it, and as luck would have it he would discover exactly what he had been searching so hard for.

Shamp has always been a sharer. Whether it is explaining the science of blimps or showing you his newest 3D model, Shamp has always been passionate about sharing what he cares about, and recently that passion has been astronomy. Though astronomy may seem a limited market for a high school student, Shamp has turned to Instagram to share another of his passions, and it is this zeal that has inspired others to share their interests.

This interest was sparked in Shamp when in seventh grade he took a space and rocketry stem class.

“When I first signed up for the course I was pretty impartial towards anything that had much to do with space and was just wondering what it would be like, but when I finished and had done well I started looking at the whole subject in a completely different way,” Shamp said.

This class would set the kindling for a flame that would lead Shamp toward the stars, and the onset of this journey would be in the creation of 3D models. However, these were not the ordinary store-bought models, these were much more impressive. Shamp explained that over the course of ‘‘eight to ten hours, depending on the project,’’ he would meticulously construct nearly identical models of various space transport using only a 3D pen. The peak of his foray would come when Shamp decided to recreate NASA’s Saturn Five rocket.

“I chose the Saturn Five mainly because it is really what most people think of when they hear the word spaceship, but also the Saturn Five [is] the ship that put the first men on the moon which really made it stand out for me; especially early on,” Shamp said.

Over the course of the next fifteen hours, Shamp would create frames, fill in empty space, and break three 3D pens, while attempting to create the most historically accurate replica possible. Finally, standing at five feet tall, the behemoth of a rocket was complete. Having attained his magnum opus, Shamp was now ready to move on to his next venture.

While looking through his garage one day Shamp would quite literally uncover a bigger and better passion, and this discovery would be that of a telescope. Though he would soon realize that this was no ordinary telescope.

This telescope piqued Shamp’s interest in astronomy, but, due to its age, would need replacement. So Shamp approached his parents about getting a new one, and the answer was quite clear to Shamp’s mother Jessica Shamp, a RHS staff member.

‘‘I have always felt it is important to be as supportive as we can when it comes to our children’s interests, especially when they could lead to a lifelong hobby or potential future career. Not everyone finds something in life they are really passionate about,’’ she said.

With his newly acquired telescope, Shamp could now begin to share his newest passion. Drawing inspiration from similar pages on Instagram, he decided to start his very own astronomy account. However, this account would be different. This account would offer the opportunity for the Revere community to learn what was happening hundreds of miles above them while they slept, and it was this vision that would surprise Shamp in the coming days.

“After I had posted a few images it was really cool to see how people were responding. Especially because all of it was stuff I hadn’t really worked for, but were just things I saw enjoying my hobby, and for people to find that interesting was really special,’’ Shamp said.

The response Shamp has gotten also inspired a fellow student to begin his own page focusing on his passion. Nate Smith, an avid fisherman having seen the reaction to Shamp’s page, has decided to follow in Shamp’s sharing spirit, and begin his page focusing on fishing in the area.

‘‘It was really cool to see the reaction Shamp was getting, and seeing that kind of support has given me the push to start what I’ve been wanting to do for a long time,’’ Smith said.

Taking inspiration from Shamp’s local viewpoint Smith also looks to incorporate a similar factor into his page. Which he hopes will give him a similar response to that of Shamp’s.

As people have for centuries, Shamp looked into the sky with a mix of wonder and amazement. He then used all of the resources available to him to try and understand it. Once he had an understanding he told the story of what he had found. Through sharing his passion, Shamp may have gained recognition, but his biggest achievement was that of inspiring another to follow theirs.