Paige Hudnall helps out on her family’s farm and started the Active Minds club at Revere. 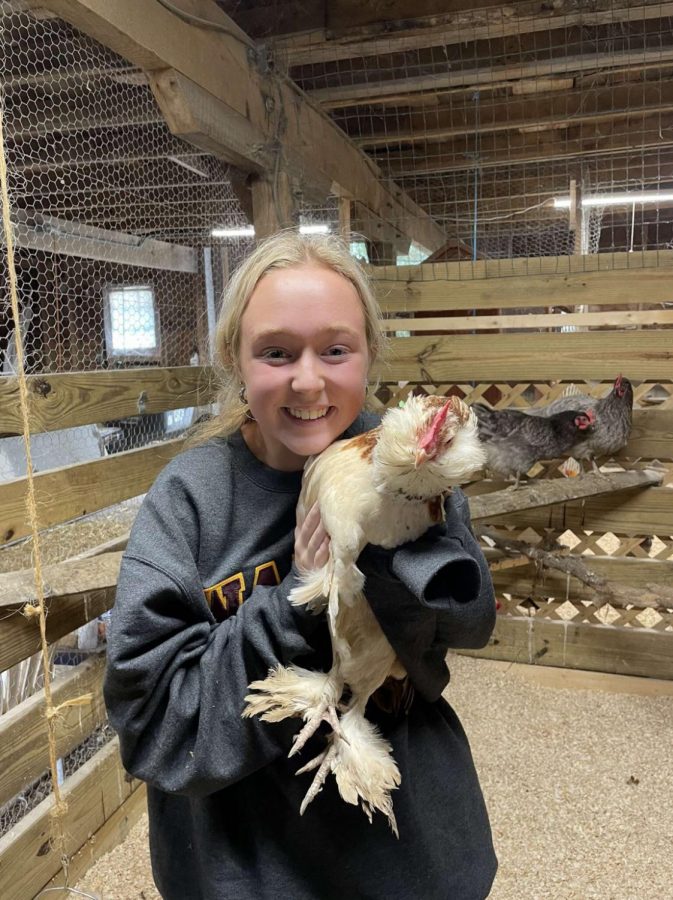 Hudnall poses with one of her chickens.

Two goats named Rocky and Trouble lived happily together as brothers. The two of them would constantly venture around the property and hang out with each other and their owners. Tragedy would strike the farm the next morning, for Rocky did not wake up from his slumber, which shattered Trouble’s heart. He could not go on without his brother. He spent the next few weeks alone in his stable, only getting up for food and drink. Soon, months flew by for Trouble, and he still had no one to play with.

Eventually, the owners had a surprise for Trouble — a new goat named Waffles would join the family farm. Waffles was very eager to meet Trouble and become friends; however, Trouble was very closed-minded about inviting a new goat to his already broken heart, and would seclude Waffles from everything a goat would normally do. The owners saw this, but did not know how to help him. It appeared that Trouble would never return to the goat he once was.

One day, to Waffles’ surprise, Trouble waddled outside to play with him. The two began to trot around the farm together, and slowly became best friends. Now the owners cannot separate the two goats from each other. Both Waffles and Trouble now live a trouble-free life together.

The tale of the three goats took place right at the Hudnall residence. Paige Hudnall is a senior tennis player, boutique operator and animal lover, as well as the Co-President of Revere’s chapter of Active Minds. She and her family own two goats, three cats, four dogs, four horses and tons of birds. Hudnall has owned numerous animals ever since she was born, as she said they have always been a part of her life. Hudnall described the lessons the animals taught her.

“I have grown up with animals all my life, and they taught me how to set my priorities. They are basically little children and I am the babysitter. So they have helped me a lot with being responsible,” Hudnall said.

One of Hudnall’s priorities is mental health. She and her friend Anna Freeman reached out to the guidance office to discuss a possible club for Revere High School that would raise awareness towards mental health. Together, they found Active Minds, which is a nationwide club that brings attention to mental well-being. Now Hudnall and Freeman are co-presidents of the group. Hudnall talked about what mental health means to her.

“I feel like people look down on mental health too much. They view it with a negative stigma, but to me, it is something that should be valued because that is how one grows and learns,” Hudnall said.

Animals can help balance mental health, according to Hudnall. Her first-hand experience with them makes her believe that they can improve one’s mental well being. This is what she had to say about the effect that animals have on mental health.

“I do think animals can help anyone’s mental health. No matter what happens, they give you the same love every single day. They are a best friend that never judges,” Hudnall said.

Freeman moved to the Revere district her freshman year. She immediately met Hudnall since the two had numerous classes together, and they became friends. Freeman talked about what makes Hudnall special.

“Her most valuable [personality trait] is that she is so thoughtful [to]others. She is so concerned about others and helps them through their problems. She has always been there for me, and she is a great person to talk to no matter the circumstance,” Freeman said.

High school counselor Emily Rion helped Hudnall and Freeman make their vision a reality. Rion was in the works of creating a mental health club before the two students had the idea, so when the both of them approached Rion she was ecstatic because it would make her idea a reality. Rion had this to say about Hudnall as a person.

“Normally I do not show people their letters of recommendation I have written for them; however, I sent her the letter because I wanted her to know how highly I think of her. She wrote me a very kind response, because that is the kind of person she is. She is an amazing human being,” Rion said.

“Resilience is the number one aspect of Paige. In regards to who she is as a person, she is everything I would want for a leader. She is someone I would send my kids to for advice,” Rion said.

Hudnall is also a part of the women’s varsity tennis team. She said that she loved the team and enjoyed watching her teammates perform. Hudnall also had the opportunity to compete with her younger sister, which she talked about being an unforgettable experience.

“Playing with my sister was a moment I will always remember. It was awesome to see her fall in love with a sport that has been a large part of my life. She has been really committed to the game, so I cannot wait to come back and watch her continue to grow as a player,” Hudnall said.

Hudnall finished off with this message involving Active Minds.

“I think anyone, even if they do not struggle with mental health, should come and see what Active Minds is about. It is a great way to form a community with the school,” Hudnall said.

The value of mental health is emphasized by the story of the three goats. In their instance, Trouble coped with the death of his brother; however, Waffles was there to support Trouble as a friend. Even with animals, one can witness how keeping one’s mind-set positive is vital. To learn more about Active Minds, visit Rion’s room in the guidance office for more details.