Freshman participates in many different styles of dance 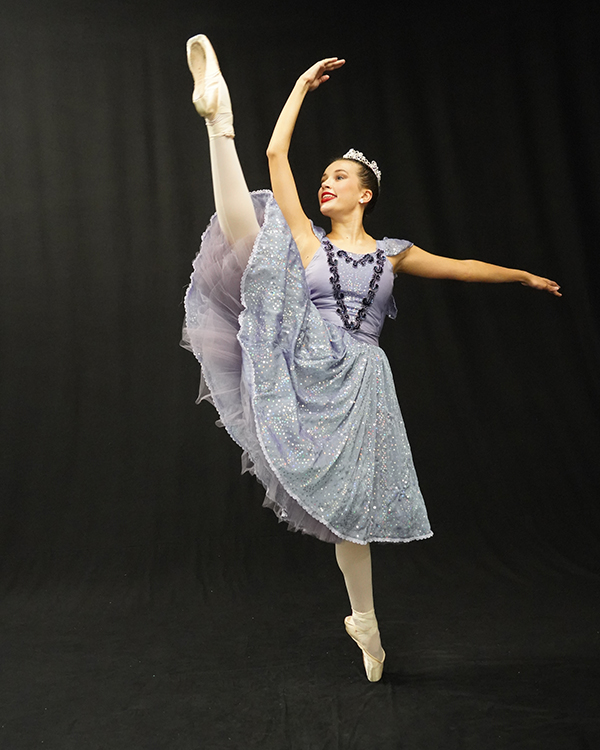 Banks has been dancing with the company Ballet Theatre of Ohio for nine years.

Fake snow falls onto the stage after the Nutcracker dances are over, the dancers take their final bows. The curtains fall and dancers can finally break character and run to each other in celebration of their hard work and dedication. This is what freshman Rylie Banks experiences after each performance as a dancer at Ballet Theatre of Ohio.

Banks has been dancing with the company Ballet Theatre of Ohio for nine years, but she has been dancing for a total of eleven years. At this moment she participates in many styles of dance from ballet to her competition team, Dance Kraze.

Banks devotes much of her time to dance and goes to her studio, Meneer School of Dance, five-to-six days a week. These days can range from four hours to sometimes ten hours on rehearsal days.

Banks partakes in many different types of dances, not just ballets. She is in ballet and pointe at Meneer School of Dance, and jazz, lyrical and modern with her competition team. Jazz is a type of dance performed from the core, with clean and strong lines emanating from the hips and chest with big leaps, more detailed footwork, and quick turns, into while lyrical has aspects of jazz but is closer to ballet. Modern is like lyrical but has more power and the steps are sharper.

“Right now I’m in four dances. I have a trio called Slow Me Down and I’m in Schindler’s List which [are my two] lyrical dances and we did that last year too. I’m in Climb which is my modern dance, and What is Jazz? Is my jazz dance,” Banks said.

This is her second year in Dance Kraze. Banks’ first year she won first place in many of her competition pieces, including Schindler’s List, which she is performing this year as well. Schindler’s List won best of the best at Nationals last year. Bailey Thomas, another member of Dance Kraze, has been dancing for eight full years with her, and they both tried out for Dance Kraze last year together.

“It is still new and we are still getting used to some things, but I think I speak for the both of us when I say we both wished we would have joined sooner. In Dance Kraze we go to three competitions a year and this year Rylie and I are competing in a trio [together] with another girl at the studio,” Thomas said.

Even before Banks joined Dance Kraze her schedule was full. Dance Kraze ranges from two to four days out of the week, so even before Dance Kraze she still had four to five days out of her week devoted to ballet, pointe, and rehearsal for a performance. Kelly Meneer teaches Banks’ ballet class, ballet technique, and pointe class. She is also the daughter of Christine Meneer whom is the owner of the company.

“She is a very dedicated student. She comes into class and works [hard]. Our school has a very high level, so [the dancers] are basically in professional level classes. They take four days a week just for ballet alone, and they rehearse for Nutcracker and our spring shows on the weekends. So it is a lot of hours in the studio and they work very hard,” Meneer said.

Banks is in all of the advanced classes and was also titled as a professional dancer this past summer.

“This year for our BTO picnic, which is something we do for the upcoming year, I thought I was going to be a junior, but when Mrs. Meneer announced everything she told me I was moving from junior to professional as a surprise,” Banks said.

Meneer, who was part of deciding Banks to be at the professional level, defines what it means to reach this standard.

“Your skill level, how you can execute steps, knowing your lines, and basically your overall technique is what gets you into that advanced class. You [also] have to be really smart, you have to know how to use your body properly, you need to know how to think ahead in combinations, how to look in the mirror and see if your line is correct,” Meneer said.

Meneer also explained that to be a professional and get into the advanced class more is needed than just skill.

In December of 2019, Banks performed her eighth Nutcracker show and had many roles in the performance.

“This year for the first weekend I was the maid, snow demi and fairy. For the second weekend I was snow demi again, fairy queen, and rose bud. Fairy queen was my lead part, and my biggest part in Nutcracker so far,” Banks said.

Through the years some of her fellow dancers and teachers have seen her grow. Thomas described how she has seen her grow over her dancing career.

“As we have gotten older, and especially this past year watching her perform Fairy queen in the Nutcracker, has helped me to realize that she has grown into a beautiful dancer. Her lines are flawless and her extensions are on point, she has come so far from when we were little girls,” Thomas said.

Meneer earlier explained that skill level is needed to reach a high level and how she saw Banks reach this level. Banks got to show off this growth at her performance, Copelia.

“Last spring we did our ballet, Copelia, and she was our understudy for one of the roles. She actually went on, and she didn’t know she was going on until the Monday before that weekend of performances, and she just absolutely blew us away. It was a huge moment for her, and she hasn’t looked back. She just keeps growing and we’re expecting great things in the next few years,” Meneer said.

Banks’ weekends are usually filled with rehearsals for an upcoming show, and sometimes on what she calls “civic week,” she must leave school early to practice at the theater. “Civic week” is the week before the shows, and this year when rehearsing for the Nutcracker, she had to leave a little after sixth period was over to get to the theatre. During shows Meneer sees her grow, but also at a regular day of rehearsal or a ballet class she sees Banks develop into a stronger, fluid dancer.

“She comes in and puts her head down, but she’s very funny, she’s laughing all the time and is a character for sure. She is constantly a source of good, positive energy, and she pushes to the front of the class. She’s there to be an inspiration to some of the younger dancers in the class, but she stands as tall as some of our juniors and seniors,” Meneer said.

Banks is a role model to some of the younger dancers, but in her classes she also has her own role models.

“I look up to Christina Black (nicknamed Ina) because she is an amazing dancer and a close friend. Also, Hailey Mulchon, especially in Dance Kraze, because she has the face and the movement as well as perfect turns, and I just love watching her. I also look up to Rachel Sulek because she was snow queen in eighth grade and has amazing turns like Hailey,” Banks said.

Throughout the years Banks has performed in Sleeping Beauty, Cinderella, the Wizard of Oz twice, Copelia, the Nutcracker eight times and is now in the process of preparing for her second Little Mermaid show where she is playing one of the mermaid sisters. The show will be performed on May 2 and 3 at the Akron Civic Theatre.