Between class periods students walk into the bathroom. They smell a familiar scent: mint, mango, gummy bears, buttered popcorn etc. These delightful scents, however, did not come from a harmless snack you can buy at the movie theatre, but rather they came from the vapors of the rapidly popularizing Electronic Nicotine Delivery System or Vape.

In recent years, vaping among teens has increased. According to the National Institute for Health, the number of teens who have vaped in the past 30 days has increased from 11% in 2017 to 20.9% in 2018. Additionally, they reported that more than one in ten eighth graders said they have vaped in the past year. According to Johns Hopkins Medicine, “In 2015, the U.S. surgeon general reported that e-cigarette use among high school students had increased by 900 percent, and 40 percent of young e-cigarette users had never smoked regular tobacco.”

At-Risk Counselor at Revere Bonnie Simonelli spoke about the reasons vaping has become so popular and how people are fighting back against nicotine addiction.

“We do educate kids especially younger than high school, so it’s more of a prevention. Unfortunately, the marketing for vaping companies is much stronger than our marketing. We start in elementary school. The truth commercials are really coming out, and our best defense is education. . . . If we can keep kids from trying alcohol, nicotine and marijuana our chances of keeping kids free of drugs like heroin, xanax and pain medication are much greater by avoiding the addiction cycle,” Simonelli said.

The long-term dangers of vaping have not been thoroughly studied and little is known, and despite the lack of long term research, some conclusions have still been made. According to Johns Hopkins, vaping exposes users to fewer toxic chemicals than smoking, which contributes to twenty percent of deaths in the U.S. every year. A study conducted by the European Review for Medical and Pharmacological Sciences discovered numerous possible effects of vaping. Those effects include: “nausea, vomiting, headache, dizziness, choking, burn injuries, upper respiratory tract irritation, dry cough, dryness of the eyes and mucous membrane, release of cytokines and pro-inflammatory mediators, allergic airway inflammation, decreased exhaled nitric oxide (FeNO) synthesis in the lungs, change in bronchial gene expression and risk of lung cancer.”

The increased use of vape products has schools like Revere worried. Revere has taken multiple steps to counter the use of e-cigarette devices.

Principal Phil King commented on what the school is doing to curb nicotine use with its students.

“We are trying to send the message that vaping is number one – not appropriate, number two – illegal and number three – bad for your health,” King said.

Steps are also being taken outside of school to prevent nicotine addiction. The tobacco twenty-one initiative aims to raise the age to buy tobacco to twenty-one in summit county and is sponsored by the summit county public health department. Research from the department has shown that students obtain nicotine in multiple ways. Thirty-seven percent of high school users purchase it themselves from a store and twenty-five percent give money to someone else to buy it for them.

“T21 works because 21-year-olds are out of the social circle of middle and high school students to purchase them tobacco at school and on the bus. Secondly, it empowers the health department to hold retailers accountable for selling to minors through undercover buys, fines, and licensing,” Kendrick said.

Nicotine is an addictive substance and can be challenging to quit, especially alone. The council on chemical abuse states that a nicotine addiction can be just as hard to quit as a heroin addiction. People trying to quit have numerous opportunities to find assistance.

“I will meet with any kid who wants to quit and help them out anonymously. There are other outside programs as well. 1-800-QUITNOW is a free service that will talk you through it when you feel like you need nicotine,” Simonelli said. 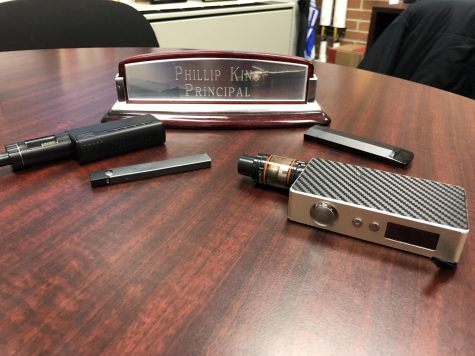